WHAT ABOUT REFORMED BAPTIST COVENANT THEOLOGIANS?

Last time, I proved that Presbyterian Covenant Theology is wrong on the Basis of one verse, Gal. 3:15. I told you that the following week, I would show the errors of Reformed Baptist Covenant Theology. That was four months ago. Welcome to the second "week." (Sometimes I get too busy) But without further ado, let's just jump right in shall we?

So, Galatians 3:15 really only destroys the Presbyterian Covenantal position. But in our day, many Baptists have failed to understand the historical and theological nature of CT and thus many Baptists are pretending that they can be both Baptist and Covenental at the same time. The modern day Reformed Baptist will side with the New Covenant theologian and agree with the entire argument from last *week (that the whole of the Mosaic Code has passed away). They will state that God's covenants are unchangeable and Christ came to completely fulfill and abolish the Old Mosaic Covenant.

One of the most well regarded spokesmen for the Baptist form of Covenant Theology is Richard Barcellos.  In his classic work, "In Defense of the Decalogue" a work purposed to debunk NCT, he argues that the whole Old Covenant is gone.  In that wonderful work, he says: 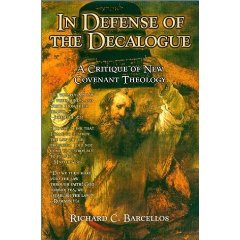 "Hearty agreement must be given when New Covenant theologians argue for the abolition of the Old Covenant. This is clearly the teaching of the Old and New Testaments (see Jeremiah 31:31-32; Second Corinthians 3; Galatians 3, 4; Ephesians 2:14-15; Hebrews 8-10). The whole law of Moses, as it functioned under the Old Covenant, has been abolished, including the Ten Commandments. Not one jot or tittle of the law of Moses functions as the Old Covenant law anymore and to act as if it does constitutes redemptive-historical retreat and neo-Judaizing."

Clearly, Barcellos and other Reformed Baptist recognize that Paul's argument from Gal. 3:15 is air tight and not one jot or tittle of the law can still be in force upon Christians. However, Barcellos immediately contradicts himself when he suggests that the Decalogue continues to have "abiding moral validity under the New Covenant." In the eyes of Reformed Baptists, the law is both abolished, and has abiding moral validity at the same time.

But this is THE Reformed Baptist Covenant position. The RB takes the law, proclaims that all of it has passed away, and then declares that the Decalogue (the Ten Commandments) "doth  for ever bind all... to the obedience thereof" with a "universal and perpetual obligation."

The 1689 London Baptist Confession of Faith, and men like Barcellos who subscribe to it, make a terrible mistake by returning to the law when Christ has set us free from it. What the Reformed Baptists do is almost schizophrenic. The 1689 states, "neither does Christ in the Gospel in any way dissolve, but much strengthen this obligation [the 10 Commandments]." So the Baptist's declare that the ten commandments are "abolished" like Barcellos says above, and the obligation to keep them has been "strengthened."  So they are both abolished and strengthened at the exact same time? It sounds strange but I understand the reason for it. Let me explain.

Reformed Baptists believe that the Ten Commandments possessed two different characteristics when they were created. First, they were the summation of the Covenant that God made with Moses and the Israelites. Second, they were also God's moral, and timeless commands for the instruction of men. Thus, it makes sense to assert that once the Mosaic Covenant is fulfilled and gone, that that particular characteristic of the law would be "abolished" while the second characteristic (moral instruction) continues on. Here's a graphic I made to help see how they understand the Decalogue as both abolished and in force at the same time. 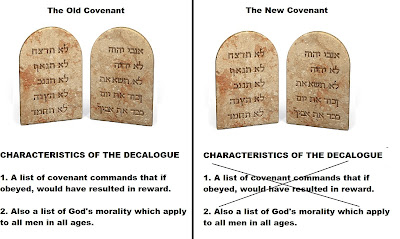 In the Old Covenant dispensation, they had two purposes, first as a set of stipulations through which obedience would lead to reward, and second as a guide of morality. Since the Old Covenant is gone, so the promise of blessing for the obedient one is also gone (thankfully, the curses for the one who breaks a command is also gone. Praise God!) But since it also functioned as a guide for morality, they are also still in force. Thus, they are both abolished in one respect and untouched in another. It makes sense. There is however a problem with this view, and that is that the view perverts the Christian life in regards to "Sabbath" observance.

Because the view declares all of the Ten Commandments to be moral guide for Christian living, it must declare that the Sabbath command is moral; when it is clearly not. This perverts the Christian's practice and seeks to place burdens upon believers that God never places upon them. The problems with Sabbath practice are myriad and cannot be addressed in one blog post, or even ten; but at the end of the day the Christian is required to bind upon his back aspects of law that Christ has freed us from.

Let's hear it straight from the 1689 London Baptist Confession.

"The sabbath is then kept holy unto the Lord, when men, after a due preparing of their hearts, and ordering their common affairs aforehand, do not only observe an holy rest all day, from their own works, words and thoughts, about their worldly employment and recreations, but are also taken up the whole time in the public and private exercises of his worship and in the duties of necessity and mercy."

But we're not done yet. Notice that you cannot talk about, think about or do work on Sunday, but you also must avoid, words about recreation, and thoughts about recreation, and you certainly may not partake in recreation on Sunday. Instead, you must be "taken up the whole time in public and private worship" unless there is a duty of necessity or mercy. So no watching your team play football unless it's absolutely necessary, or if it's an act of mercy (which if your a Dallas Cowboys fan, it may be).
Flying a kite with your children on the Sabbath would be regarded as recreation unless you can justify it as an act of necessity or mercy. Any sort of recreation or entertainment is off limits, unless you can spin it to make it look like it's an "act of mercy or necessity." Thus, the claim that all ten commandments are of moral import obstructs a Christian's freedom in Christ and places burdens upon them in ways that God has never instructed, thus forbidding good and lawful things that God allows, simply because it's Sunday. The Reformed Baptist Catechism states: 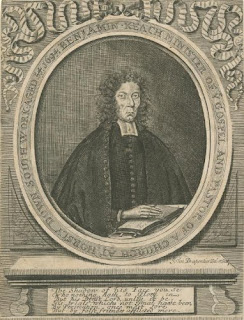 So you see? There are things that you can do for recreation on every other day, like play a game of basketball, but on Sunday, it is "unlawful" according to the Reformed Baptist view.

To summarize, the Reformed Baptist view is a bit complicated because they hold to a New Covenant view of the law in that they affirm that all of it has been abolished, but then they assume all ten commandments are of moral import and so they return to pick the Decalogue up out of the dust, brush it off, and bring it with them into the New Covenant; and in that error, they part company with the New Covenant theologian who wants to leave the Sabbath behind and cling to whom the Sabbath pointed, Jesus Christ. For the Sabbath was "a shadow of the things to come, but the substance belongs to Christ."  Col. 2:16b

Next *week, I'll address how the Reformed Baptist's theology is inconsistent when he calls the Sabbath commandment moral and I'll prove that it's a ceremonial law that is no longer binding.

*note: The word "week" can be relative when you're too busy for your own good. It may be a month or two... or three or four.